It feels like there’s not a single day without someone in my Twitter or LinkedIn network announcing the start of his or her new personal newsletter (or podcast, for that matter).

Newsletters have been called “the future” and “the next generation” of media, “a more attractive medium than the newsfeed” and people’s “favorite new social network”.

To me, newsletters feel more like a rebirth of blogs and RSS: Both typically have long-form, high quality content and they are distributed via an open standard.

Substack and Revue are essentially trying to become the WordPress of newsletters, while Stoop is trying to build a Google Reader equivalent to capture the demand side. 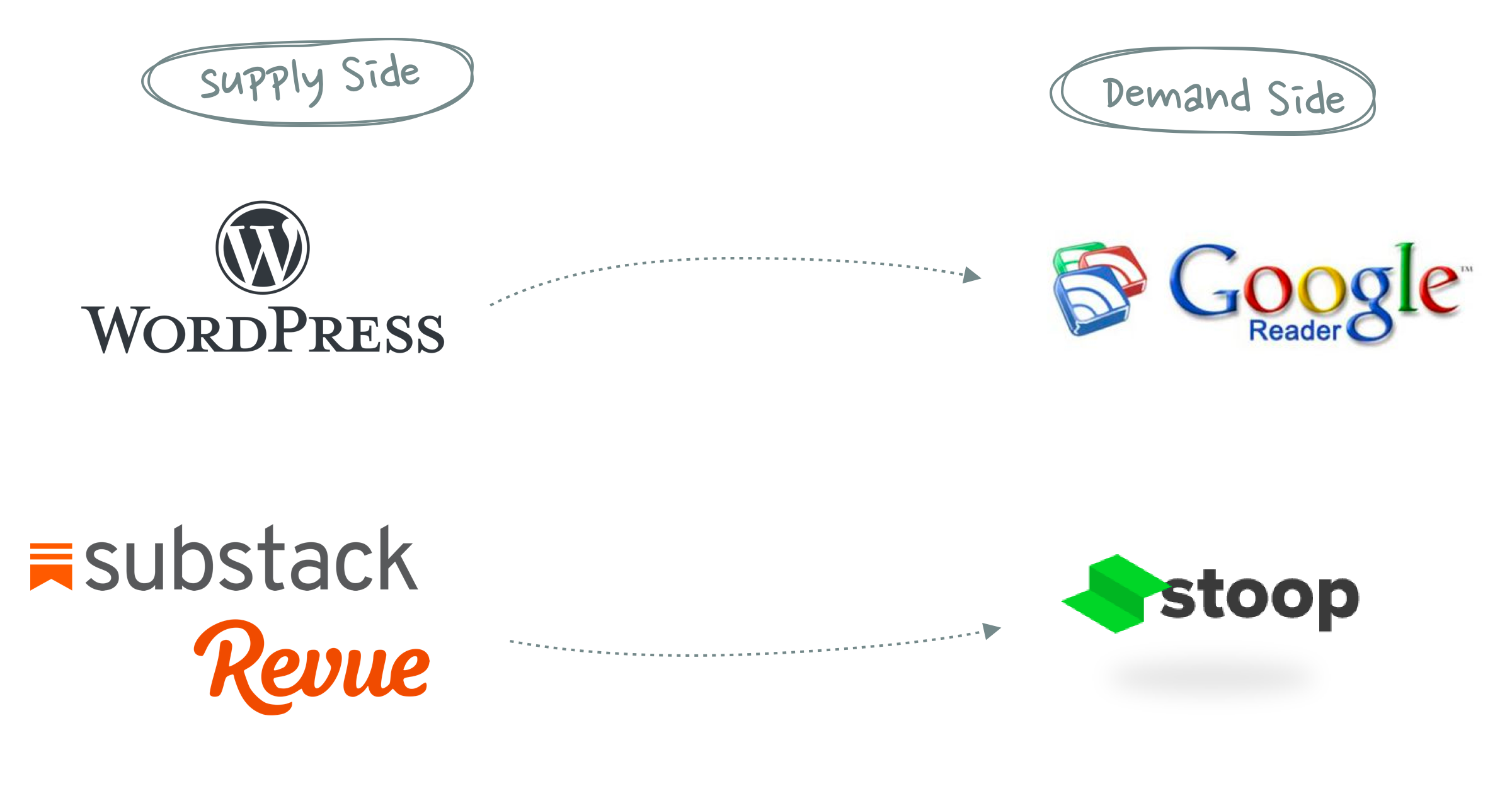 What’s interesting about newsletters is that consumers are willing to pay for them. While blogs have never really figured out monetization (apart from ads), Substack alone claims more than 50,000 paying subscribers.

This might partly be a timing thing (blogs were popular during a time when people weren’t used to the concept of paying for digital content yet), but I wonder if it’s also driven by the nature of how newsletters work: You have to wait to receive them – like an Amazon package. Maybe that makes the medium feel more tangible and thus worth paying for?

Some have argued that newsletters create a more intimate relationship between writers and readers and that it’s this intimacy that consumers are willing to pay for. I don’t disagree with that theory but would argue that blogs are even more intimate than newsletters. If a newsletter is a personal message from a writer, a blog is the writer’s personal home the reader gets invited to.

What’s special about personal blogs is not just the actual writing, it’s also the design the content is presented in. Newsletters lack the unique design aspect that blogs have.

Side Note: I firmly believe that the lack of design customization options is one of the main reasons Medium has never lived up to its potential.

It also seems like newsletters are less discoverable than blogs. Blog posts would often reference other blogs (remember blog rolls and trackbacks?), which is how readers would discover new content. Newsletters feel more isolated. (Someone should start a newsletter-recommendation-newsletter)

So what then explains the newsletter hype?
Simple: Distribution.

Every medium is essentially a two-sided market that needs to solve a chicken-and-egg-problem in order to take off. You need content suppliers to attract consumers and vice-versa.

While blogs could in theory be read by anyone with a browser, the technology that really mattered on the consumer side were RSS readers – and those were never adopted en masse.

Social networks on the other hand have become a victim of their own success: The amount of consumers has attracted so many players on the supply side that platforms needed to introduce algorithmic feeds to handle the abundance of content.

This is why writers like newsletters so much. As other distribution channels are becoming increasingly crowded, email provides an alternative trade route. 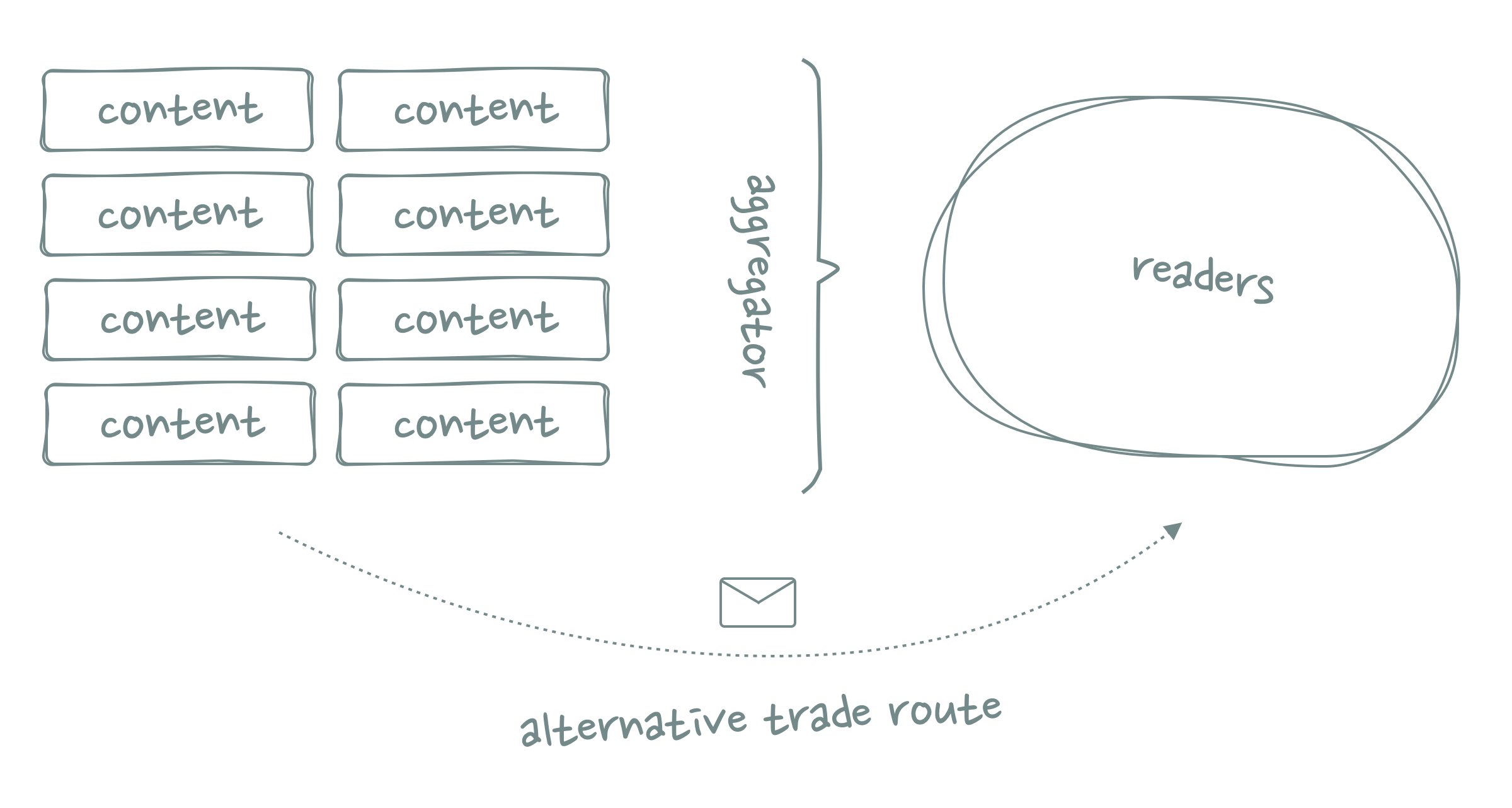 That problem is that the nature of cross-side network effects will ultimately lead to newsletters facing the same dilemma: As long as the number of subscribers increases, so will the number of newsletter publishers. Users’ email inboxes – already full with non-newsletter-emails – will get as crowded as social media newsfeeds. Just wait until Gmail introduces an algorithmic feed for your newsletter inbox.

Perhaps a more interesting question, then, is to ask what’s the alternative trade route to email?

I’ve been fascinated by the rise of Telegram blogs in recent months.

Tucked between personal messages from friends, Telegram blogs are read in an even more intimate setting than email. In contrast to newsletters, readers can see the entire history at once (less ephemeral) and engage with the author and/or other readers via built-in community features.

Here are a few channels I enjoy:

At the moment, most of these are just link lists and RSS-like notification channels, but I wonder if they’ll evolve into a unique Telegram blog format over time.

Do you have any other Telegram recommendations?
I’d love to hear about them!

(1) Some argue that email (like blogs) are better for content creators than social networks because the medium’s open standard means that they “own their audience”. What people seem to fail to see is that an open standard doesn’t matter much when the demand side is controlled by an aggregator. Bloggers lost thousands of subscribers when Google Reader shut down. Gmail has more than a billion users.

(2) This post might sound like I dislike newsletters. That’s not the case – I just really miss personal blogs 🙂 Here are a few newsletters I love (and which you should subscribe to): Monday Musings, Alex Danco (+ Scarcity in the Software Century), Stratechery, Matt’s Thoughts In Between, Super Organizers, Johannes Klingebiel’s Zine, Seedtable.