When I say proof-of-work, I’m not talking about consensus algorithms like the ones that some crypto currencies use. I’m talking about social networks.

At their core, social networks are primarily about one thing: Building social capital through signaling. As I wrote in Signaling as a Service, signaling can be broken down into three different components:

For example: A Patagonia vest signals both a prosocial attitude (“I care about the environment“) as well as wealth (“I can afford to spend $500 on a jacket“). Depending on where you live, it might also signal something about your occupation. 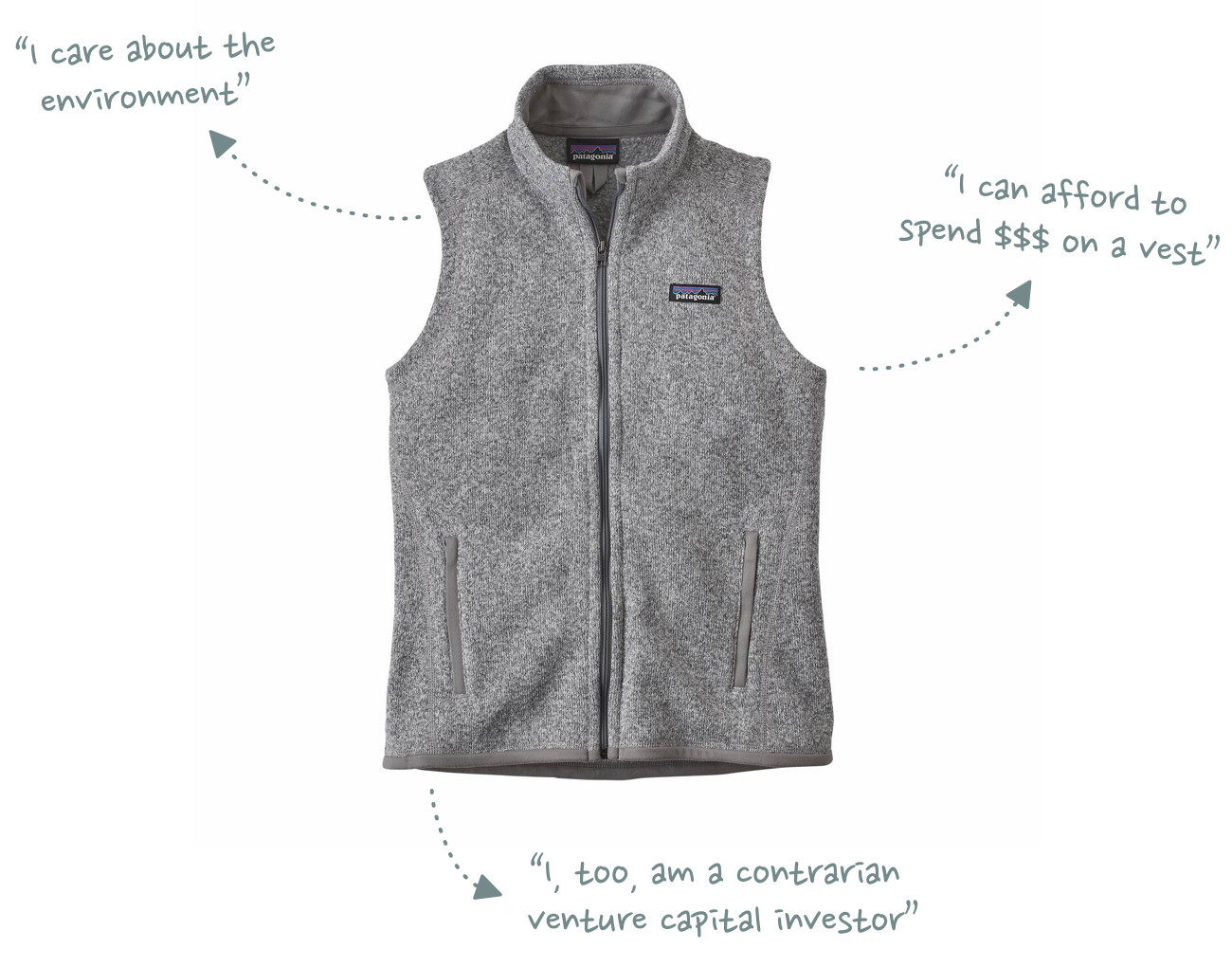 In order to signal these messages to others and build actual social capital you need a signaling distribution channel. One option would be to wear the vest in public where others can see it – but there are obvious physical constraints to the size of the audience you’d be able to reach.

This is where social networks come in.

Their primary role is to distribute signaling messages at scale and transform them into quantifiable social capital (in the form of likes and followers).

In Signaling as a Service I compared signaling amplification to Eugene Wei’s idea of proof-of-work hurdles, which he describes as follows:

Almost every social network of note had an early signature proof of work hurdle. For Facebook it was posting some witty text-based status update. For Instagram, it was posting an interesting square photo. For Vine, an entertaining 6-second video. For Twitter, it was writing an amusing bit of text of 140 characters or fewer. Pinterest? Pinning a compelling photo. You can likely derive the proof of work for other networks like Quora and Reddit and Twitch and so on. Successful social networks don’t pose trick questions at the start, it’s usually clear what they want from you.

But the more I think about it, the less I like the comparison. I actually think that Eugene’s proof-of-work theory only scratches the surface of what social networks actually do.

02 A closer look at proof mechanisms

Take a look at this very cliché Instagram picture. The photographer clearly put a lot of thought and effort into its composition and applied different filters and editing tools to make it look nicer.

It’s a perfect example of Eugene’s definition of proof-of-work.
Proof-of-creative-work, to be more exact.

Editing your photo helps to amplify your signaling message and sets you apart within Instagram’s status arena (aka the newsfeed). It also adds additional signaling messages to your post: “Look how great a photographer I am” or “I’m a creative person”.

But those are not the main signaling messages you are communicating here. What you really want to tell your followers with this photo is something along the lines of “I’m a world-traveler” and “I’m in a happy relationship” (which in turn are also just signaling proxies for wealth and mating worthiness).

The photo and the location tag are your proof points.

Social networks are therefore not only signaling distribution (and amplification) networks – they also allow users to prove their signaling messages.

The creative proof-of-work is just pretext and helps to boost your post. What’s more important are the additional proof mechanisms that social networks provide. In the case of Instagram those are photos and location tags.

When new social networks emerge they have to introduce new proof mechanisms to differentiate themselves from existing incumbents. These can either be novel proof-of-creative-work hurdles or completely new proof-of-x mechanisms.

TikTok is a good example for proof-of-creative-work innovation. The app provides creators with a powerful set of video editing tools that have opened a whole new level of creativity.

The cost to participate in TikTok’s status game is a lot higher than Instagram’s (compare a well-made dance choreography on TikTok to your median Instagram travel post) – but its powerful feed algorithms also make discovery easier and thus reward users faster and with more social capital.

TikTok doesn’t add any new proof points beyond its novel creative work hurdle though. You can signal and prove your creativity but you could achieve the same by uploading your video to Instagram.

Strava, on the other hand, introduced an entirely new proof mechanism: Proof-of-physical-activity. By using your phone’s GPS sensor (or a 3rd-party fitness tracker), users can actually prove how much and fast they ran or cycled. In contrast to Instagram photos, Strava’s proof mechanism is a lot harder to fake (though there are exceptions). 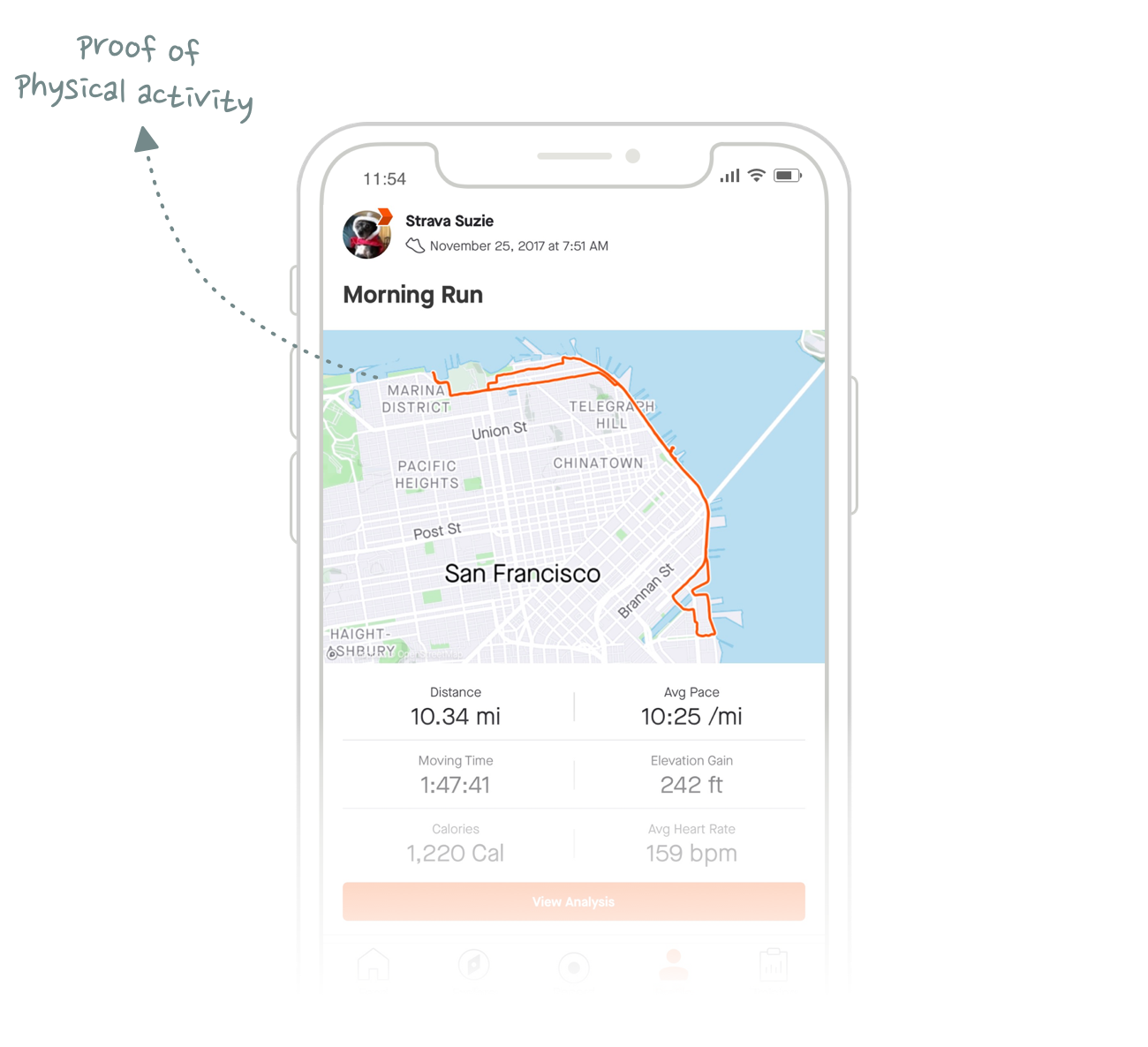 What’s great about Strava is that it reinforces a behavior that’s actually good for you: While the status game that initially got you into the app might be zero sum, the actual physical exercise you have to put in to compete has a very positive, compounding effect.

The question is: What other social networks should we build that could have similar positive feedback loops? And what are their proof mechanisms?

Let’s start with the two examples in this tweet. 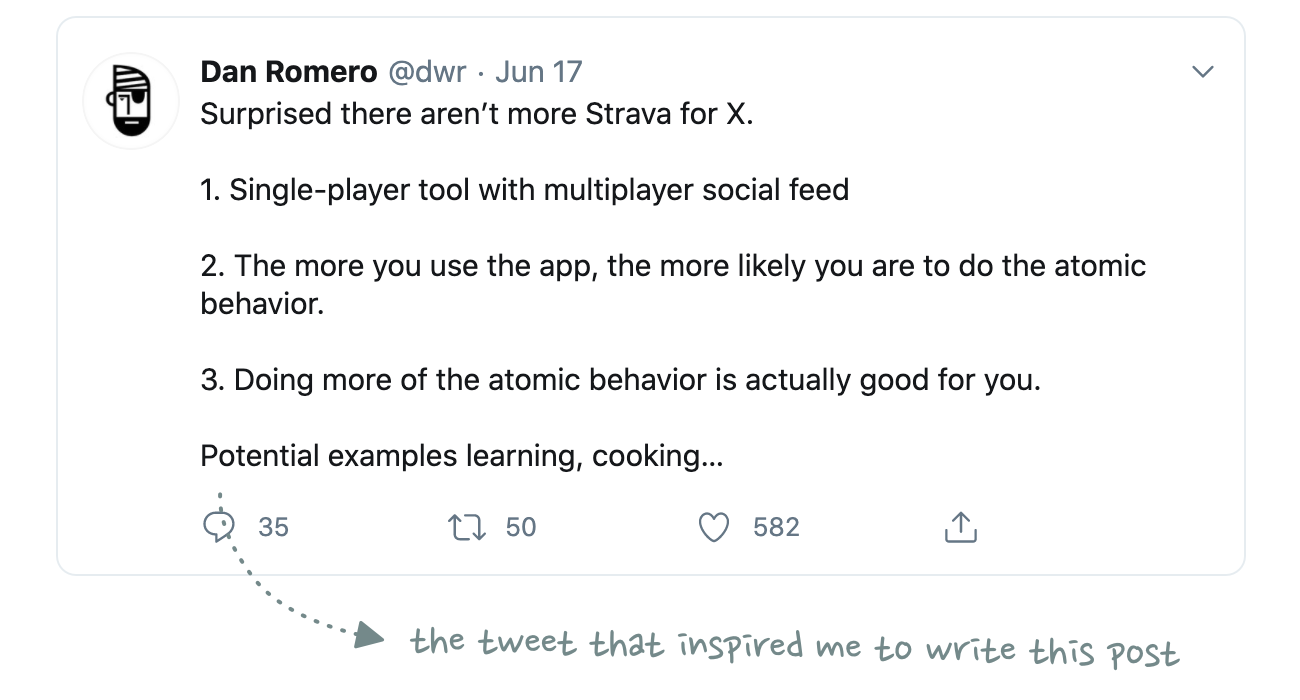 I love the idea of a Strava for Cooking – but I’m very skeptical that it can be built. Why? Because the necessary proof mechanisms don’t exist.

The primary metric you optimize on when cooking is taste. But how would you measure or quantify taste? The closest proxy to taste that we have is optics: How good does the meal that you cooked look? This can easily be proved with a photo .. but that’s a proof-of-work mechanism that Instagram already offers (including filters to make your food look nicer). As long as no one comes up with a better proof mechanism for cooking, I think it’s unlikely that we will see a successful social network in the space.

While the activity of learning itself might be hard to quantify, you can measure the outcome of learning: knowledge. Has anyone built a multiplayer version of Anki yet? Flash cards would be a perfect proof-of-knowledge mechanism and could easily be turned into a game where you compete against friends.

Similar to physical activity in the Strava example, learning is not something that most people enjoy doing. As TikTok founder Alex Zhu points out, education goes a little against human nature. In combination with a strong enough signaling mechanism however, you can get users to participate. It’s kind of the opposite of Chris Dixon’s famous “Come for the tool, stay for the network” strategy. Come for the status, stay for the tool.

A related product I’d love to see is Strava for Reading. Imagine an eBook reader that not only tracks how much time you spend reading but also *what* you are reading. Based on these proof-of-(reading)-work mechanisms you could build streaks or GitHub-contributions-like visualizations that incentivize users to read more (and more regularly).

You could even build leaderboards for different topics based on the content of the books and articles you read. Or think about a score that indicated how balanced your reading behavior per topic was (to incentivize users to read takes on political topics from different perspectives).

Unfortunately, I think it’s unlikely that we will see a product like I described anytime soon. The world’s largest bookstore, most popular eBook reader, and biggest social network for books are all owned by a company that has very little competency in design and user-facing product innovation.

(Side note: Amazon’s monopoly on books might be the most underrated sub-optimal equilibrium in tech.)

Another app that would be interesting is a social investing app. Think “Robinhood but as a social network”. It seems like investing is already quite a social activity – just look at communities like r/wallstreetbets. As patio11 pointed out, Robinhood already feels more like a game than a finance app. 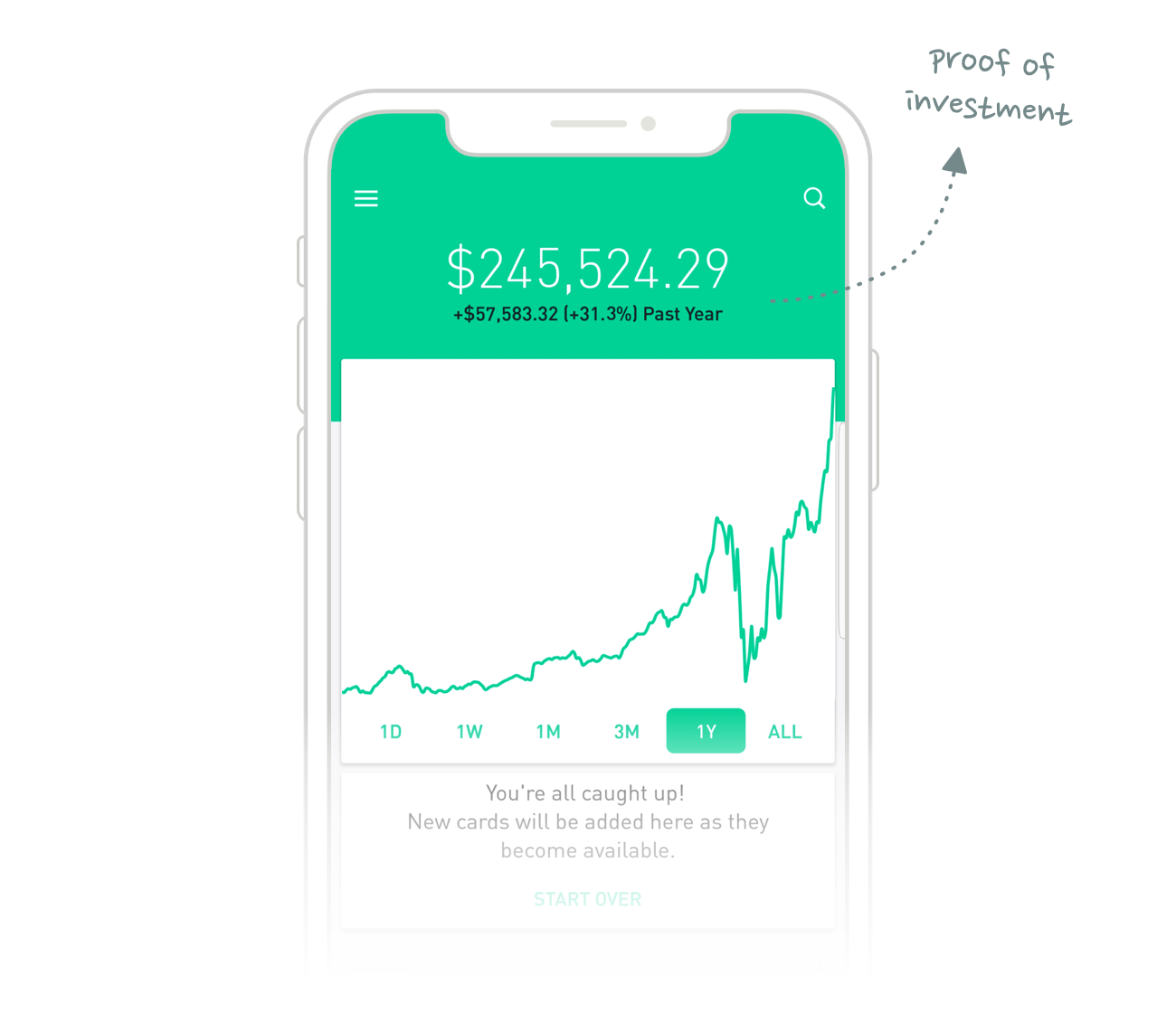 So why not build an investing app that opens with a feed of all your friends’ investments and their returns over time? Instead of sharing screenshots on Reddit and Instagram you could prove your investments right in the app.

Perhaps a well-designed, consumer-friendly prediction market app would be the ultimate proof-of-x social network. Strava for being right.

While we are on the topic of being right: Do you agree with my thoughts in this post? What other social networks and proof-of-x mechanisms would you like to see?

Thanks to Dan Romero, Des Traynor, Jan König, Max Cutler and Zack Hargett for reading drafts of this post.

Streaks are a powerful technique for developers to increase user retention and engagement. For example, Snapchat shows you the number of consecutive days you’ve been exchanging messages with a friend and rewards you with special emojis the longer you manage to keep the streak alive.

The user’s urge to continue the streak doesn’t really come from the positive rewards though, but is mainly based on negative reinforcement, namely the fear of losing the streak. This behaviour can be attributed to the “Sunk Cost Effect”, which describes our reluctance to pull out of something we have put effort into.

There has been a lot of criticism lately about negative reinforcement loops and gamification techniques that make apps more addictive – especially when used by services or games which are primarily used by kids/teens.

But streaks can also be extremely helpful when used in the context of self-improvement because they help to build habits.

I currently use three tools that use streaks which help me to build (and maintain) habits and be more productive:

>_ Headspace
Headspace will show you the number of consecutive days you’ve been meditating. Making meditation a daily habit has been super difficult for me and the streaks have definitely helped. I wish they were more public though to add some social pressure.

>_ Swarm
This one might be a little suprising to some of you, because most people just use Swarm as a life logging tool to remember which places the have visited. Swarm introduced streaks a while ago, but I’m not sure how many people use it build habits. I use to make sure I go for a swim at least once per week. I am currently at week 73 and counting ?.

>_ WIP Chat
WIP is a community of makers and a public to-do list at the same time. Apart from the negative reinforcement (losing the streak), it also adds a lot of positive reinforcement in form of the encouragement from other makers in the community. WIP is one of the best products I’ve started using recently and has definitely helped me to be more productive. Great job, Marc! ?