What Shopify and Amazon can learn from Mimetic Theory

This is the second part of my essay on the state and future of ecommerce. In part one we discussed the current status quo of online shopping and looked at the different models and value chains behind Amazon and Shopify.

In this part, I’ll explain what I believe is currently missing in the online shopping experience and what Shopify and Amazon (or someone else) should build.

Let’s kick things off with a chart that Benedict Evans tweeted recently: 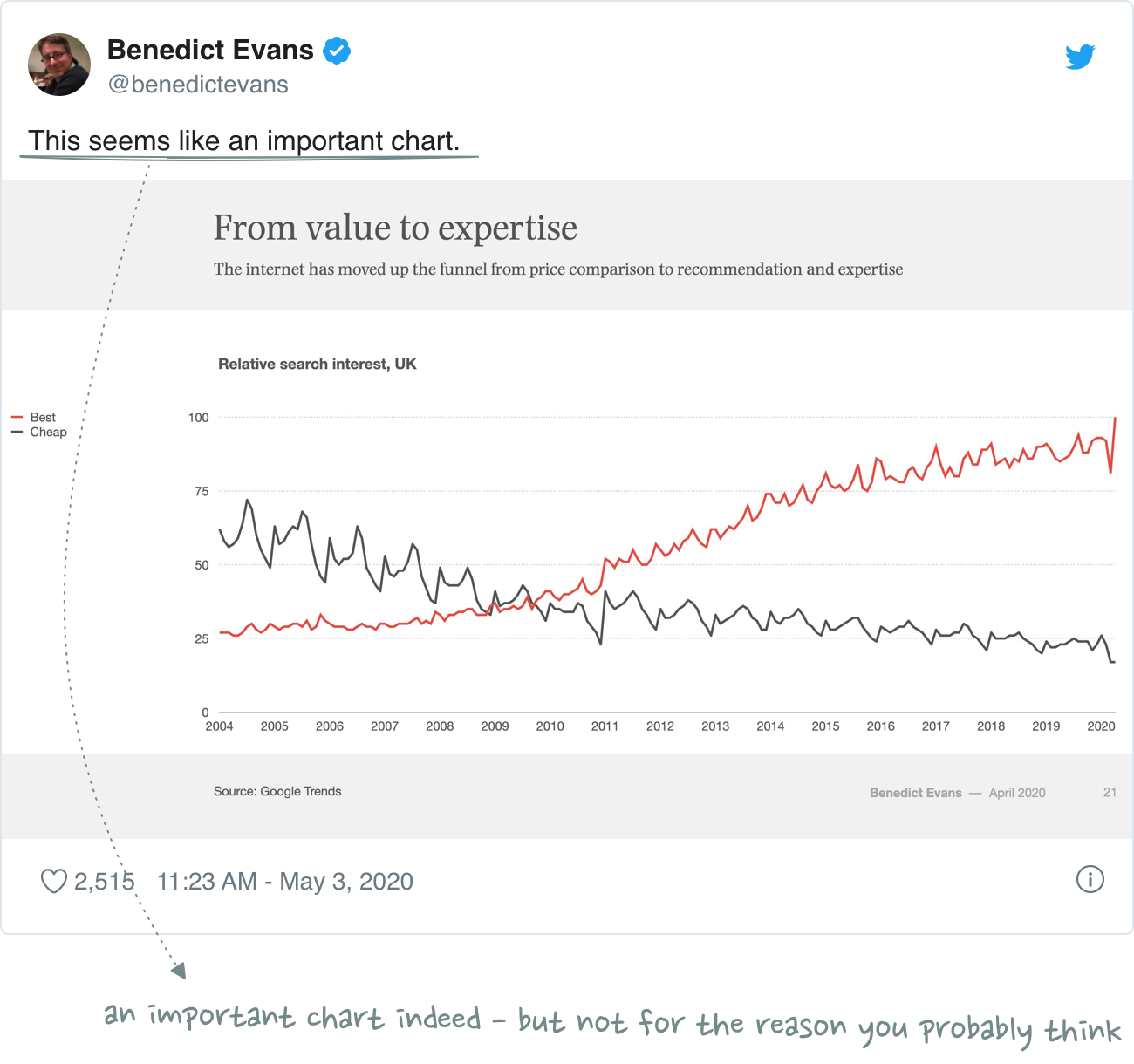 The easy way to read this chart is that consumers are becoming less interested in finding the cheapest options and are instead searching for the best options. I find that difficult to believe.

A perhaps more interesting interpretation is that Google’s “cheap” search queries are declining because users already know where to find the cheapest option: On Amazon (and other vertically specialized search engines like OTAs).

As we discussed in last week’s article, Amazon – like Google – is primarily a search engine. But since all its search results – unlike Google’s – are products, it’s easy to rank them by price. If you already know what you want, there’s no point in searching on Google first. Your shopping journey starts and ends on Amazon.

But what about the “best” option?

Amazon’s default search results are “Featured”, which factors in a variety of criteria (purchase frequency, availability, reviews, …) to show you the most relevant products. But that’s not the same as the best. (Side note: It actually turns out that the most relevant results also happen to be the most profitable for Amazon). You can also choose to rank results by customer reviews, but those scores don’t feel very trustworthy either.

As a result, non-price driven Amazon purchase journeys initially start on other sites which help users figure out what the best product for them is (through curation and reviews). This is similar to the Shopify model, which relies on discovery channels such as Instagram and Pinterest to drive users to its stores.

In contrast to Shopify though, there is not one – or even a few -dominating channels. Discovery is spread across many, many different websites, which Amazon rewards with its affiliate program. The fact that Amazon just drastically reduced its affiliate fees is perfect evidence of how little negotiating power these individual sites have in this value chain, despite their collective importance.

The second problem I see is that reviews only work for a handful of product categories. You can only rank and compare products if they have a strong utility. For example, you can determine what the best TV is by looking at screen resolution or HDR support. These features are easy to measure and compare.

But how would you decide what the best pair of sneakers is? Or the best handbag? You could look at build quality or materials, but those attributes are neither easy to quantify nor do they have an actual influence over what people perceive as the best.

So how do you determine what the best option is when utility isn’t the decisive factor in the purchase decision?

A good framework to understand how consumers make purchase decisions is René Girard’s Mimetic Theory. René Girard was a French anthropologist and philosopher who has gained quite a following among people in tech in recent years, largely driven by the influence of his ideas on Peter Thiel.

The core idea behind mimetic theory is that human development is based on imitation. What sets humans apart from other species is our ability to learn by observing and copying others. According to Girard, this includes watching and imitating what other people desire.

This is not something most of us are aware of. We think we make autonomous purchase decisions based on objective facts (“These shoes are waterproof”) or personal preferences (“I like the way these sneakers look”).

In reality though, Girard argues, there is never a direct relationship between subject (the consumer) and object (the product). Instead, the relationship is always triangular between the subject, the object and a so-called mediator – someone the subject is drawn to and wants to imitate. 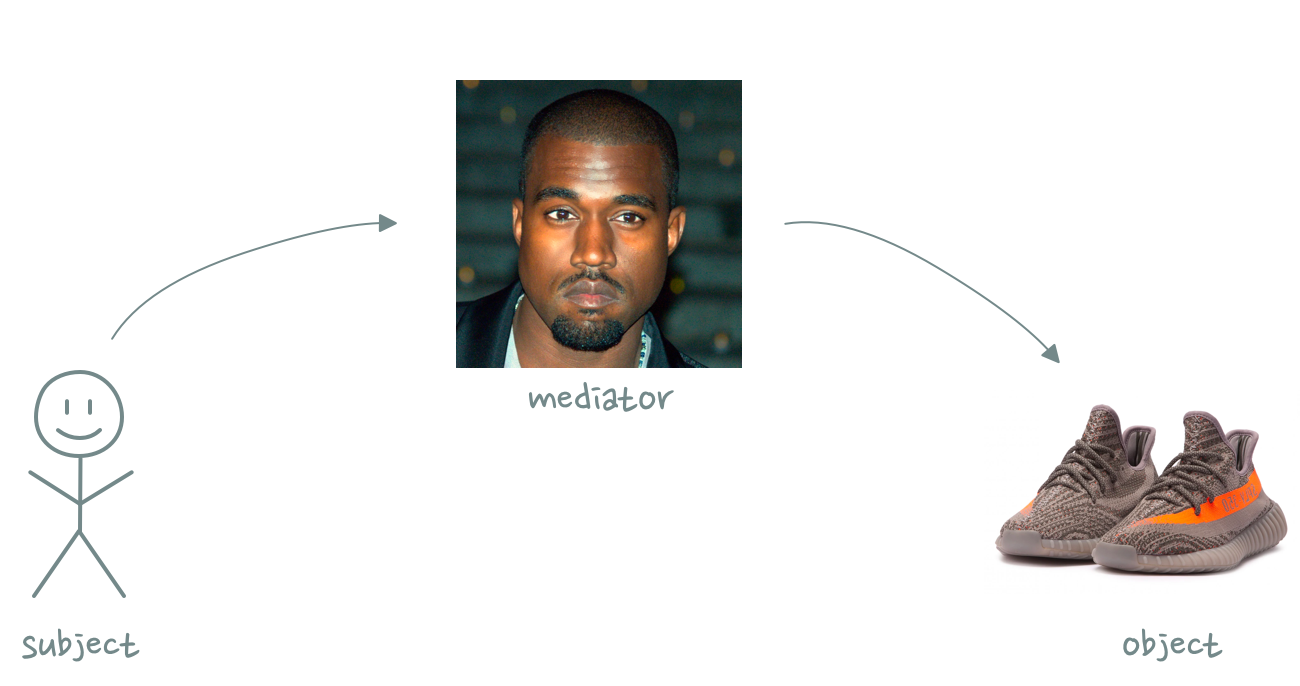 In other words: We don’t actually want the object itself. What we really want is to be like the person we admire. The object is just a means to an end.

The person we are trying to imitate might be a celebrity, but it could also be one of “the cool kids at school” or someone you discovered on Twitter or Instagram.

As a consequence, there isn’t a “best sneaker”. What you perceive as “the best” isn’t based on objective attributes, it depends on who you are trying to imitate.

As Alex Danco brilliantly summarizes in his essay on Girard, many advertisers already leverage mimetic desire in their campaigns:

Advertisers understand this principle really well: you’re not trying to convince somebody that they want Bud Light or a Ford F150; you’re telling them they ought to desire membership to a particular peer set, and the way to become a part of that group is to drink Bud Light and drive an F150. It’s why Abercrombie can advertise their clothes with models that aren’t actually wearing any of those clothes; the clothes aren’t the point.

This is also why influencer marketing works so well and why Instagram has become the perfect discovery channel for Shopify.

04 What Shopify Should Build

As we discussed in last week’s essay, Instagram is both a blessing and a curse for Shopify. On the one hand, it is the perfect discovery channel for the type of products that are typically sold by Shopify merchants: visually appealing objects you didn’t even know you wanted (fashion, homeware, furniture, etc). On the other hand, too much reliance on Instagram can become dangerous. A demand aggregator always has the upper hand over a supply aggregator as evidenced by the high tax Shopify D2C brands have to pay to Instagram in the form of ads.

Nevertheless, further integrating with Instagram is probably a good idea for Shopify. Instagram’s user behavior is a prime example of mimetic desire. Users can scroll through the life of the person they want to imitate to get an idea of what they should desire.

Shopify already announced a deeper integration with Instagram and Facebook last week, now shops can sell directly on Instagram. The ideal feature, however, would allow users to buy objects straight from the feed of their favorite influencers.

While brands will still be important (for signaling, among other things), I suspect that a lot of stores will become commoditized over time. Ecommerce will become more modularized as transactions shift from both retailers and D2C brands to individual influencers.

It’s not hard to imagine a future with a separate Instagram profile tab that lists all the products a user recommends. The user becomes the window display – the actual store is just an API in the background. 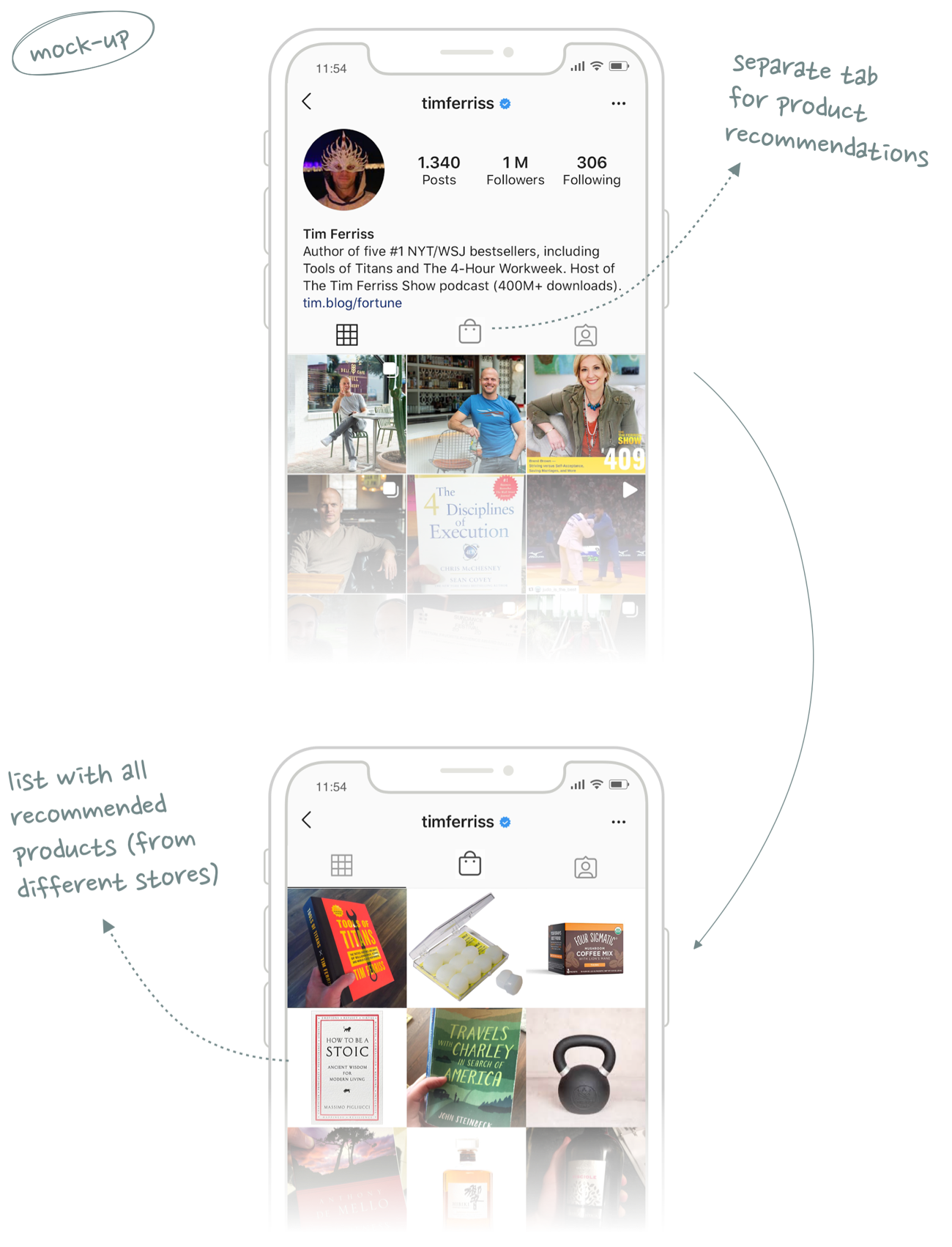 Similarly, should Shopify decide to make its Shop app an actual discovery platform, it should build its recommendation feed around influencers – not shops.

Rather than an algorithmic feed with random products, the app should feature collections of products that certain people use or recommend. Apps like Svpply and Kit have tried to build similar product recommendation services, but none of them have ever gained mainstream adoption. Yet I’m still convinced that there is a market for a stand-alone app that does curated product discovery.

05 How Amazon Could Leverage Mimetic Theory

Amazon is not a product discovery platform, it’s a search engine. It works best when you already know what you want to buy. When you search for “Sapiens”, Amazon will give you a variety of options to buy Yuval Harari’s bestseller (audiobook, Kindle, hardcopy, etc). Perfect.

If you don’t have a specific book in mind yet, however, and just want to discover a history book, Amazon becomes useless. It will show you a list of every SKU available that fits the history book description, but no real guidance on which book you should pick.

But what if you could filter and rank search results by mimetic desire? 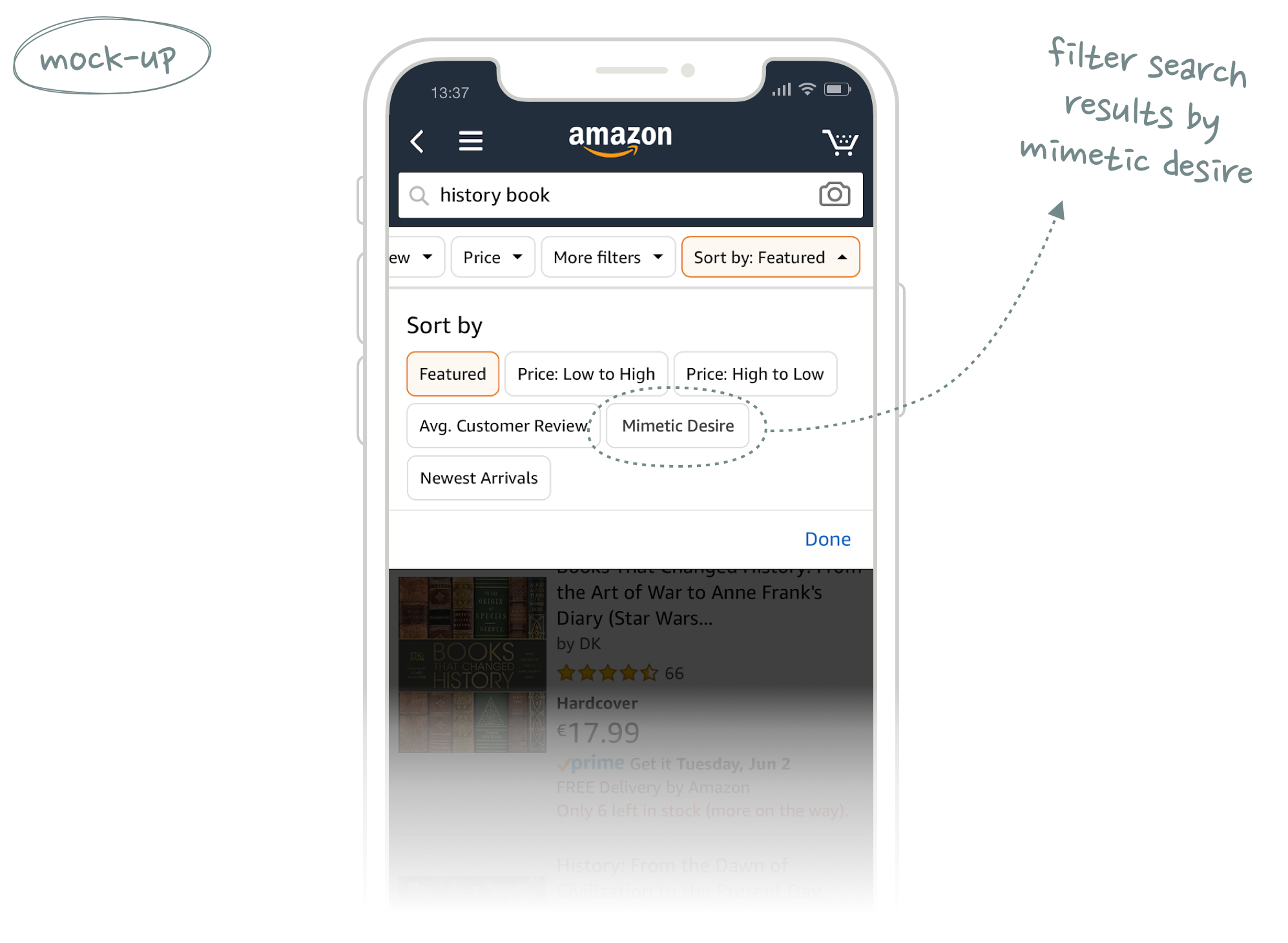 Instead of a seemingly random list of books, Amazon should now only show me reading recommendations from people I admire. Who these people are could easily be derived from Twitter data, for example (users I follow + whose tweets I engage most with). 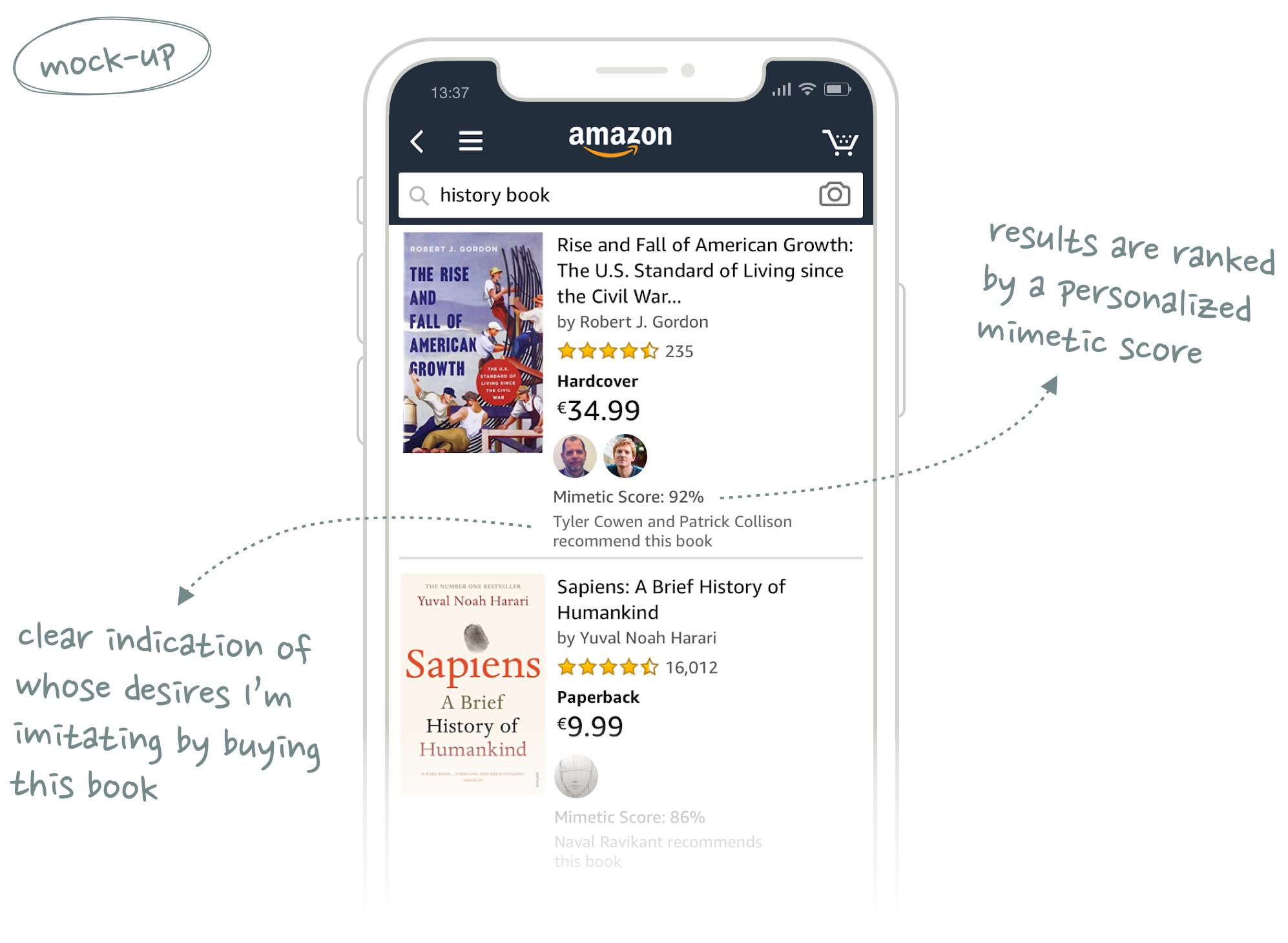 Search results are now ranked by my personal memetic score. I can also see at first glance why each particular book in the list is relevant for me. Not only would this feature improve Amazon’s search results, it would also turn the site into more of a discovery platform.

Given their respective value chains, Amazon and Shopify both have an interest in becoming better at discovery. Technology companies have a tendency to (try to) solve discovery with automated recommendation engines, but that’s not how we make purchase decisions.

Algorithms are not the reason why we buy things, no matter how good they are. Mimetic desire is.

If this essay has inspired you to imitate me and my desires, feel free to follow me on Twitter. It would a be great honor to become your mediator.

Thanks to Gonz Sanchez, Kent de Bruin and Max Cutler for reading drafts of this post.